“Woman”. That’s how the characters I almost always audition for are described. Woman. Nothing more specific. Just…Woman. I suppose it’s accurate enough. I was biologically born a female. I present myself to the world as a long haired, make up wearing, boobs ‘n’ all kinda gal. So it is reasonable to assume that any brief I receive for potential work would begin with this basic descriptive word about my gender.

Let me supply some context. For any of you not in the business of show, the way the game of casting works is that I receive a project brief from my representation. It will have an outline of the show, the dates of work…and then a description of the character I am auditioning for.

The industry I work in, is quite possibly the only professional work sector where looks are legally allowed to count towards your employment. In fact, the physical components of a performer are often – not always, but often – the biggest factor in deciding if they book a job. More important than skill set. More important than experience. Than nepotism. Think I’m exaggerating? The human who plays Glinda in Wicked may sing like an angel and milk every comedic nuance with fierce originality…but if the actress in question can’t fit in the gosh darn magic bubble that carries her onstage (for all of 10 seconds), then she will be decidedly unpop-u-lah. It’s sometimes that exacting.

I myself, after many years of hearing that I was too young, too old, too fat, not sexy enough, too strong, not ugly enough, not hot enough, and so on and so forth blah blah blah, I finally landed a casting because I was tall. The Wormwoods in Matilda had a strict height requirement, and lord above, did I hear moans and groans from mates in the industry about it. It is the one and only time in my 15 year career that my height hasn’t been a complete disadvantage by the way, so I sleep at night just fine. Moan away, moochy maggots, moan away…

This blatant superficial specificity is accepted practice in the land of making make believe, and in many ways, understandably so. But what about the way in which the descriptive casting briefs for males and females radically differ?

My male colleagues, particularly when being invited to audition for a commercial or screen role, will get briefs that are positively florid in detail. “Damien is a beer drinker of Budweiser, the kind of guy that buys everyone a round at the pub. Loved by all his mates” (sounds like a keeper…). “Sean is work and fitness obsessed. He burns the candle at both ends and never apologises for it” (I’d wear a suit to that casting gentlemen…), or “Doug is the slow-to-catch-on wrestling coach and sausage maker with a heart of gold. An absent minded husband and avid stamp collector” (sadly, there is not a gent on this earth devoted enough to me, to make up for those interests…).

The BFG, himself an actor in TV commercials, is 6’7 ft tall, he has kind crinkly eyes, and he is very goofy. The briefs he receives, I shit you not, literally read “We are seeking a friendly giant 6’7 ft tall, with kind eyes, and a goofy sense of humour”. Understandably, his batting average in landing these jobs is pretty high. He walks into a casting room, and he is exactly what they have asked for. Excellent for him, excellent for them, and excellent for safe guarding his wife’s ability buy pretty things.

Which brings me back to the casting briefs that generally float my way. She is woman. That’s it.

Wife of senator at function? I am woman, hear me roar!

Hear me roar about what a lazy double standard this is! After we’re done obtaining equal pay (and please explain to me, PLEASE, as to how on EARTH this is still a thing?!), let’s all pop a gold coin into a hat to buy some casting folk a much needed thesaurus. Then they can do better when describing humans who happen to be WOMEN. Complicated, funny, sweet, sassy, daffy, fucked up, busy, smart, and-about-a-million-other-adjectives-to-describe WOMEN. 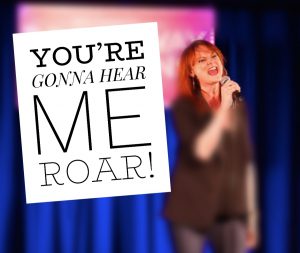